Hailing from the heart of the infamous Ruhr-Area, The Very End have always been a wayward bunch. No categories, no boundaries, not your standard heavy metal game. Even after more than seven years since the release of their last album “Turn Off The World”, this has not changed for sure. If anything, The Very End are stronger and more unique than ever before. With a new line up and a brand new album: “Zeitgeist“!

In 2007 “Soundcheck for your funeral” was named demo of the month in the German Metal Hammer magazine, which resulted in TVE’s first record deal.

Founded in 2004 by René Bogdanski (guitars, ex-Ninnghizhidda / Black Messiah session guitar player) and Lars Janosch (drums, ex-Destillery), The Very End are children of the Ruhr area, a region with a traditionally large working-class population, which has been a fruitful soil for metal music ever since. Along with Björn Gooßes (vocals, ex-Night in Gales), Marc Beste (bass, Onkel Tom) and Alex Bartkowski (guitars, ex-Guerrilla) the band has eagerly been perfecting their signature sound over the years. Like their neighbours (both in terms of location and style) Kreator or Sodom, The Very End is forged from real steel and deem it their duty to not only keep the Ruhr area sound alive, but to bring it to the next level.

After the second demo “Soundcheck For Your Funeral” was named „Demo of the month“ in the German Metal Hammer magazine in 2007, the band signed their first record deal with Dockyard 1 from Hamburg, who released The Very End’s debut album „Vs. Life“ (Mastered by Dan Swanö/Unisound and later released in USA via Locomotive Records) in 2008. Regional press (WAZ) accompanied the band and portrayed these first steps in the music business with an online video documentary in three episodes, which can be found in the video section.

In 2010 the band signed to Steamhammer/SPV, one of Germany’s most renowned labels, which over the last 25 years has made great efforts with legends like Motörhead, Type O Negative, Sodom, Annihilator, Kreator and countless others. The Very End’s second album “Mercy & Misery” (2011), which has been produced, mixed and mastered by Waldemar Sorychta (Grip Inc., Samael, Sentenced, Tiamat, among many others) and Dennis Koehne, made clear that the band takes no prisoners and brought them onto many stages throughout the country (e.g. Summer Breeze Open Air, Dong Open Air, Nord Open Air, Turock Open Air, etc.). 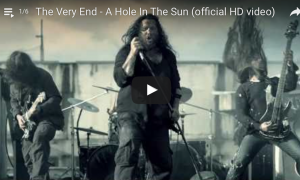 2011 The Very End released their first official video clip for the song “A Hole In The Sun”.

2011 also saw the release of The Very End’s first official video clip for the song “A Hole In The Sun”. For its production the band teamed up with Filmefahrer Pictures and brought the elaborated script to life amongst the ruins of an old coking plant in the heart of the Ruhr area. After the video premiered on iMusic1 Rocks TV it became a great success on YouTube and has furthermore been released as a limited DVD version.

The Very End’s collaboration with producers Waldemar Sorychta and Dennis Kohne as well as Steamhammer/SPV continued for their latest full length album “Turn Off The World” (2012). After “Turn Off The World” reached the 5th rank in the German Metal Hammer soundcheck in December 2012, the magazine later declared it to one of the most important metal releases in 2012. This album marked another important step for the band, both as song writers and brothers in arms and made them launch their first tour in April 2013 throughout the country. Successful festival shows at e.g. Eisenwahn Open Air, Rock Harz Open Air, Summer Breeze Open Air, Out & Loud and numerous single shows supporting bands like Sepultura, Exodus, Morgoth or Sacred Reich let their loyal fanbase grow gig by gig. 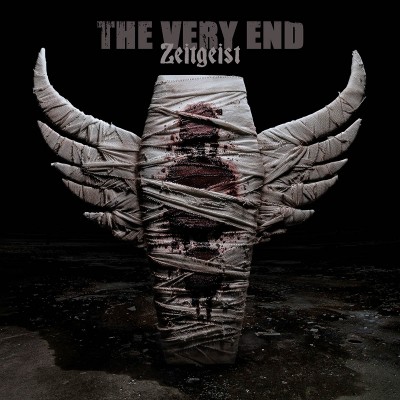 The cover artwork of the 2021 album Zeitgeist has again be realized by Björn Großes.

In 2016 The Very End were featured at the in the exhibition “Rock and Pop in the Ruhr Area”. The exhibition was held in one of Germany’s most prestiguous museums, the Ruhr Museum, which is located in the World Heritage Zeche Zollverein.

In 2019 few shows are played as the new line up focuses on songwriting for the band’s fourth album. The Very End go back to their roots and tap Cornelius Rambadt (Disbelief, Bonded, Sodom, etc.) as their producer. In fall 2019 Jerome Reil does the first takes of the “Zeitgeist” drum recordings.

The band teamed up with German label Apostasy Records and released their 4th full length album “Zeitgeist” in 2021, which was a great success. Later The Very End signed with Dragon Productions, which is a long-established and successful, international concert agency.